By Kang - December 07, 2016
Mostly unedited comments from the play Disgraced by Ayad Akhtar, typed out during the post-play discussion:
A turning in on yourself. Of realising that you are not who you are and yet you are who you are trying to hide yourself from. A part of yourself that you are secretly proud of if you dare to throw away the social norms and morality holding you back.
The caricatures are so relevant because they connect to people in a not always explainable way. In some way we can see ourselves in these characters but yet there is a simultaneous rejection.
The whole awakening to white privilege, to orientalism, to racial/religious profiling also seems to turn in on itself because it endorses a kind of stereotype also. So I guess at the same time the play is brilliant because it shoves the stereotypes up your face and declares SO WHAT F**K YOU (and I realise, maybe this curse word is a played out stereotype in itself). Because at the same time it is easy to draw causality rather than just observing that this is a man and a woman who are Muslim and white respectively- and behind them are endless categories which they can both fit and yet which so grossly misrepresents them.
Major reflection: How do you know that you truly understand? Watching from an outsider, almost-omniscient view we can see that the characters are speaking past each other. No one TRULY understands but really, on the surface if I don't think too much about it they seem like they do.
Maybe I don't understand. Do I? I was reflecting, maybe there's something deeper to my anti-establishment inclinations and indignation when the others in the Exco sound caution about interfaith things. Maybe I don't understand. But I hope I am thinking and am open to be wrong and also courageously loyal to what is right, Lord.
(ref to title: Leonard Cohen on the meaning of the song Hallelujah) 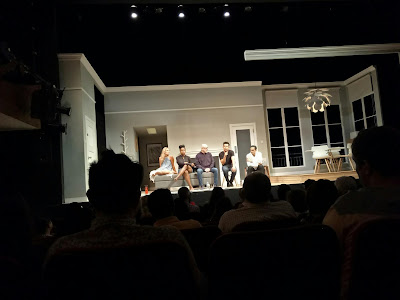