By Kang - April 18, 2017
Have humans always been enthralled by high places? The Tibetans build their temples in the mountains to be closer to the heavens above. Today we trailed behind on the overwhelming kindness and generosity of a Vietnamese family as they ascended up the steep trail in Ba Vi National Park to worship at the shrine.

We had the privilege to be privy to this ritual for some special day. Looking at the offerings of money. fragrant branches, a whole chicken... and then their lips moving silently as they knelt before the shrine. What are they praying for, I wonder. How do they see themselves in relation to the gods they are praying to? 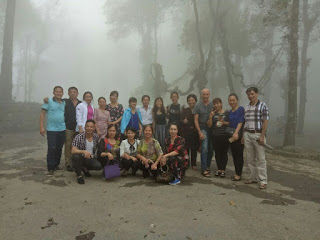 It was in that high fog-filled place that we had received so much grace freely given. We were so warmly welcomed into their fold, beckoned into the temple to see, invited (many many times) to eat their food, ushered up their van. At one point I remembered thinking: This is also a kind of shalom.

This short trip to Hanoi has really brought us to high places, both literally and metaphorically. I have personally felt so blessed by my two friends and the locals that we met. The simple unadulterated joy of playing with the McFadden kids and hanging out with them. The time at Tea Talk was really precious, as is that shared funny moment when we together with our Uber driver witnessed a straggler still half-dressed and running barefooted behind the platoon of soldiers.Halong Bay was particularly memorable with all the conversations with Vinh our tourguide and the other travelers, also the super adorable waiter/bartender. 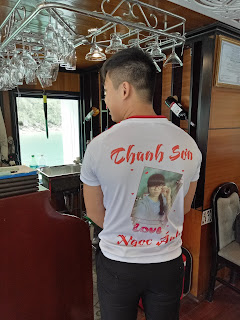 In Halong Bay on Resurrection Sunday, I looked out at the age-old formations and turquoise waters as I read Psalm 122. It struck me to that there was a call to pray for the peace and prosperity of the city, as we seek shalom for its people.

And then at Ba Vi, up at that peak as I looked at the broken beams and rubble that formed the temple, I remembered what was given to Michael: "Your people will rebuild the ancient ruins and will raise up the age-old foundations; you will be called Repairer of Broken Walls, Restorer of Streets with Dwellings." (Isaiah 58:12).