By Kang - December 22, 2017
I'm really quite zapped after having a super intense conversation which happened after a long day of team bonding. But writing these down to process my emotions and thoughts (one advice on how to use my top strength which is Intellection)

I am not a team person. I am self-centered and if I were not a Christian I would be one major asshole.

Yet today as Psalm 46 was read for devotions, I choked when it came to me to read verse 3. Angry, indignant of how I perceived the Psalm was used like that to apply to the pending upheaval and to smoothen things in the team.

And then broken also. Broken because P. rightly, very edifyingly pointed out that everyone in the team has mostly good intentions. Broken because of my own resistance as I closed off and retreated into my self-centered state.

因为有她们的接纳，我才能从自我的气愤跳出去。而甚至从这诗篇领受到安慰和滋润的提醒。And at the end of it, this vision of shalom is one of community. Not a community of robots but one with beautiful diversity, working together toward a greater purpose. 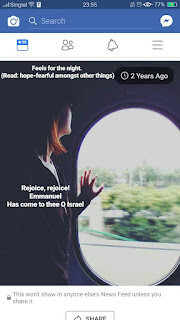 Wanted to post this throwback from FB on Instastory but thought I'd just stumble myself. So sticking it here as a visual image of tonight + point being I still see a possibility for change.

Change. What a scary word it can be. But isn't that what we are (I am) called to when we (I) decided to follow Jesus?