By kang - September 06, 2015
Think my first week here has been defined by buses. Starting with 970X which landed me at the picturesque West Kowloon Waterfront Promenade when kiasu me intended to head to school the day I touched down to register. 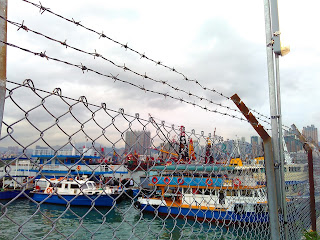 After that it was a string of mini buses, cross-harbour buses, city buses that I hopped on and off without thinking too much until I realised how expensive they were :o

970 is my favorite bus so far. Brings me to school and back, brings me to Inner City Ministries, comes pretty fast. I had a good time with the ICM staff and the Nepalese children yesterday. Would have been better my nose weren't running and head wasn't so leaden that I was almost impatient with those boisterous kids. So thankful to see 'real-action'. I guess every ministry, from prayer to running Sunday School for Christian kids to engaging a marginalised community is real action.

Whether its the naughty Doldo at Kids' Club or the shy Ruth at Sunday School, the change is equally miraculous when they see both their sinfulness and the great grace of God, and accepts Christ as Saviour. Note to self.

8X is my least favorite for how it got me wandering for more than an hour. Not complaining not complaining, just relative to 970. Not all who wander are lost, the difference is the mindset.

So I wanted to check out Cafe Lavande, and the Citymapper app told me it was 13 minutes walk from where I wrongly alighted (it was a minibus which means you won't know where the heck you are if they skip stops unless you can read street names and check the phone simultaneously well).
Okay it was kinda my fault also because I figured it won't be that hard, right? 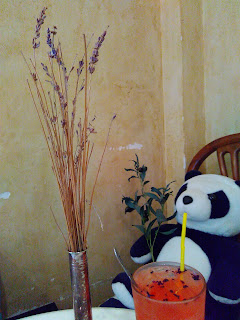 But well, took the chill pill like this panda at my destination. And so I walked streets which I wouldn't have, followed locals up the Mid Levels escalator, stumbled into Eric Kayser Maison (really really dig bakeries).

Thank God for His little providences everyday, especially protection cos I might have been a bit too reckless heading out offbeat places alone.

Can't remember what bus I caught to Island Baptist Church today. Amidst my still-leaden head I was touched by the very down-to-earth service in all sense of the term. No music accompaniment, worship leader had to remind us (good-naturedly) to follow his tune, the pastor muttering that he was running late. But then he teared halfway talking about the personal setbacks he encountered, when preaching about the redemption God sovereignly planned for Israel through Moses.

In our unbelief, God can allow us to be uncomfortable, and that is what we need- something I took away from the sharing which I was a marked contrast to the ordered sermons I am used to.. 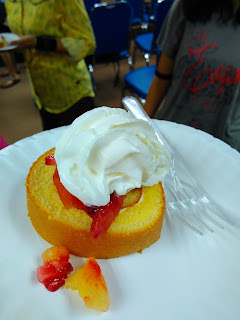 Ending off with this. Epitome of homeliness. Apparently they celebrate birthday babies every month and so here is the birthday cake cobbled together with swiss rolls, mixed fruits and whipped cream. Tasted ever so good over getting to know international brothers and sisters.
exchange ministry travels